Last to Die by Tess Gerritsen – a review 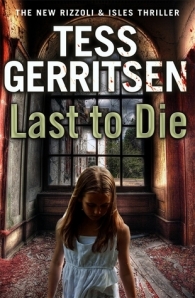 Last to Die is the latest in the Rizzoli and Isles series. In this story, Maura Isles is taking a holiday to go and visit the young boy Rat (now called Julian) who helped save her life in a previous book. Unfortunately as always with books no holiday is ever straight forward, and Isles is soon caught up in Rizzoli’s latest case. Three children were orphaned in violent circumstances and a few years later a similar fate befalls their foster families. These three survivors end up at Evensong, a school for children who have suffered violence. This school is run by the bizarre Memphisto Club, an underground Masonic type group who use their considerable wealth to try and fight evil (a bit like batman!)

I’m a big fan of Tess Gerritsen and especially the Rizzoli and Isles pairing. Whilst I don’t think this was one of her best books, it is still pretty good. As usual the plot is relatively complicated, but this is one of the pleasures of reading a book by this writer. This book seemed a little slower than usual, but I think that was a deliberate ploy to emphasis the change in location. The pace of life in the middle of a city surrounded by people would obviously be faster than in a school that is completely isolated and surrounded by fences.

The relationship between Isles and Julian also seems to change the dynamics of the plot and made Isles seem softer. There is much less medical detail than in previous stories, and by changing the location the usual family background from Rizzoli’s side is missing with the husband and child only being given token mentions. There is a bit of comic relief in the form of a bridesmaid dress though!

The school where the three children (and therefore Rizzoli and Isles) end up is a boarding school and it did feel a little bit to me like it was the start of an Enid Blyton style series. The school has a club called the Jackals who are fascinated by forensic science and manage to help Rizzoli and Isles solve the crime. It would be a good basis for a new teenage set of books, which may indeed be her aim.

Like I say this isn’t her best, but whilst I wouldn’t recommend this as a first delve into Tess Gerritsen’s novels, for those readers who know a bit of the background to the series and like the style its another good story.