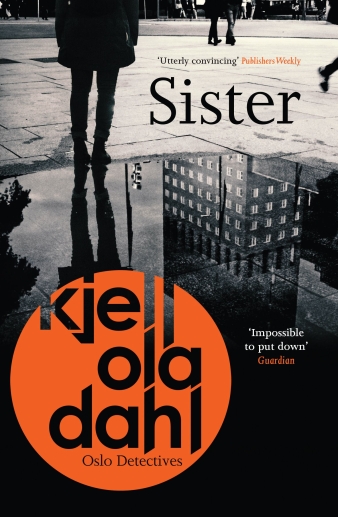 I am a big fan of a Nordic noir, and have read and enjoyed previous novels by Kjell Ola Dahl so I jumped at the chance to be part of the blog tour for his latest release, Sister.

Sister is the latest instalment in the Oslo Detective series starring Detective Frølich. Frank is working as a Private investigator and is asked by his new girlfriend to look into the missing sister of a young asylum seeker. He is reluctant to take on the work but agrees. However when he is contacted by the author of a book about a suspicious ferry disaster he starts to realise things are not how they seem. When the missing woman is found and denies having a sister, Frølich is led to an old case. As the body count begins to rise, so do the questions he is asking.

I thoroughly enjoyed this twisty tale of intrigue and murder, that from a bit of a slow start soon picked up paced and zipped along at an almighty rate. This is a dark story, covering murder, political corruption, asylum seekers and people smuggling, however despite the darkness of the story there are elements of lightness and I like the humour that is peppered throughout the book.

The character of Frølich I find quite interesting, on the one hand he is the typical loner detective, we also see his interaction with his girlfriend which gives a softer side to him. As with previous novels by Kjell Ola Dahl the writing (and the translation) is seamless, leading you from one red herring to another without interruption, weaving through until the final dramatic scenes.

One of the things I really like about Nordic Noir is the sense of place that a lot of them have, and Sister is no exception. I have never been to Oslo, but after reading this series I would definitely put it on my list.

Don’t forget to visit the other stops on the blog tour: 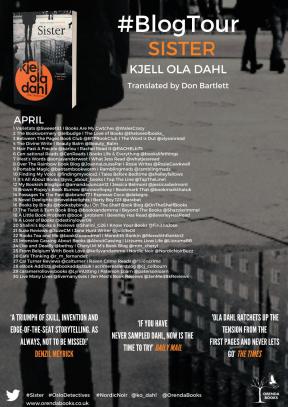 Order your copy of Sister here

I must confess to never having read any of the previous novels by Kjell Ola Dhal. However when he was introduced to me as the Godfather of Nordic Noir I jumped at the chance to be on the blog tour for his latest novel, and I’m glad I did.

In the Ice Swimmer it is a few days before Christmas and a woman is being pursued onto a tube station in Oslo. When she is then run over by a train it is at first assumed to be a suicide. Elsewhere a body has been pulled from a frozen lake. This time it is thought that he just fell whilst drunk and the cold got him. However as Detective Lena Stigersand and her colleagues Gunnarstranda and Frølich start to investigate, they begin to realise that there are more sinister forces at work, which reach far wider than they thought.

This is a superb novel that I genuinely couldn’t put down. Set in the cold streets of a Winter Oslo the atmosphere was chilly to say the least. It’s the kind of book where when you are reading the descriptions of the place you feel the need to put an extra jumper on as the cold seeps off the page.

I really enjoyed the character of Lena. Personally I felt she was a really welcome change to a lot of the current female leads out there. Often females are portrayed as either being whisky drinking, one night stand, no feeling types, or weak and pathetic needing to be ‘rescued’ Yet she wasn’t either. She was a tough police officer who could look after herself. However she had a natural vulnerable side to her that helped in her policing. Her health scare, and her blossoming relationship with a local reporter also helped to give her a multidimensional character that worked really well. Although her taste in music was little dodgy (Does anyone really like listening to Christmas music??)

The story itself is fast paced with a huge amount of twists and turns, yet it was easy to follow. The novel is the sixth in the Oslo detective series however it works as a standalone and although I would like to know more about the detectives, that’s because I enjoyed the characters so much rather than I felt I was missing anything. One thing that I also really liked was that to me this didn’t actually feel like it was a translation. Sometimes when reading translated books I find myself having to re-read bits to make sense of them, yet this didn’t which is testament to the translator Don Bartlett.

If you like novels where the story is gripping and the writing is so good that you actually feel like you are in the place it is set then I would highly recommend The Ice Swimmer. I will definitely be reading the rest of Kjell Ola Dahl’s novels.

Find out more about the Ice Swimmer and Kjell Ola Dahl by visiting the other stops on the blog tour or buy the book here: