The Infinite Blacktop by Sara Gran – a review BLOG TOUR

Whilst normally I wouldn’t post twice in one day, sometimes there are just books that it is impossible to say no to, and this was one of them. The Infinite Blacktop is the first I have read by Sara Gran, although it is actually the third novel featuring Private Investigator Claire De Witt.

The book starts with a bang, literally, as Claire comes round after a car accident and realises that someone is trying to kill her. This starts off a novel that is actually three stories in one. There is the mystery in the present day of who is trying to kill Claire. We then shoot back to 1986 where Claire and her friends are teenage detectives until one of them goes missing. Then in the middle we visit 1999 where Claire is trying to get enough hours under her belt to qualify for her PI license investigating a murder in the art world.

I must confess that this took a little while for me to get into. It read at first as a bit Agatha Raisin with each title being The Case of something. (Yes I know lots of other classic detective stories also use this idea that’s just the one that sprang to my mind!) However Agatha Raisin this certainly wasn’t. Claire is moody, violent, has a penchant for drug taking and is happy to use whatever methods necessary to protect herself and solve her cases. I think I would probably have warmed to her more if I had read the previous books whereas in this I didn’t really take to her much. However the stories themselves were interesting. I especially liked the younger version of Claire and it was clever how all the parts interwove throughout.

This was an good read, despite the three timelines it was easy to keep track of and the story went along at speed. Once you get into the swing of the writing I really enjoyed it. Despite my odd reservation about some of Claire’s actions it shows what people are capable of when they are pushed. It is also fascinating to find out about Claire’s previous life and these other time lines give a great insight into why Claire is like she is.

If you like strong female lead characters who take no prisoners then you can’t go far wrong with this gritty tale of a female PI. I will definitely be starting this series from the beginning.

Sara Gran is the author of five critically acclaimed novels, including Claire DeWitt and the City of the Dead, Come Closer and Dope. She also writes for film and TV, including ’Southland’ and ’Chance’, and has published in The New York Times, The New Orleans Times Picayune and USA Today.

Her latest novel is available here

Visit the other blog tour stops to find out more: 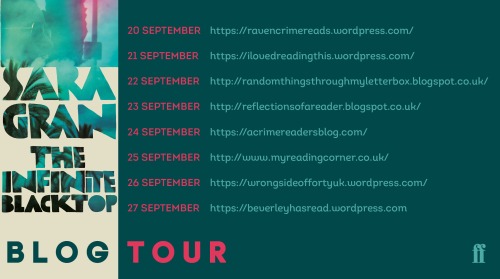