Thanks to Anne Cater and Orenda Books for inviting me onto the blog tour for Big Sister.

Big Sister is set in Norway and features Private Detective Varg Veum. Varg is visited by someone who he thinks is just a new client, until she arrives and introduces herself as his half sister.  However she doesn’t just want to meet new family, she actually wants him to try and find her god-daughter Emma. Emma is a student nurse who has gone missing from her student accommodation in Bergen. Varg starts his search but the further he delves into Emma’s background and her troubled home life the more he realises that this is much more than a simple missing persons case as he gets drawn into a world of biker gangs and family secrets.

This is the first of the series that I have read although is the 20th novel to feature the main character. Varg is an interesting person that is the archetypal gruff single private detective on the one hand, but shows a slightly softer intriguing side as well. Seemingly very lonely but through choice rather than circumstance. His life seems to be focused purely on his work with the odd personal relationship an afterthought. Personally I felt it was nice to read about an older character (Varg being in his 60s) which I have to admit I didn’t realise he was to start with.

I enjoyed the story and although it seemed rather slow to start with this was necessary to set the scene and introduce the other characters. The second half does pick up the pace though and there are frequent twists and turns. This is quite a dark feeling novel, with almost a menacing tone to some of the writing.  Although I think that it would help understand the main character more if you had read the previous novels, the actual story works well as a stand-alone too. Towards the end this is one of those books where you think it is about to conclude, but then suddenly another twist is thrown in and your thoughts change again.

I enjoy reading Scandinavian noir and this could well be the start of a great new series to try. Once again I think my ‘to be read’ pile is going to get bigger.

Don’t forget to visit the other stops on the blog tour. Big Sister is available now on amazon. 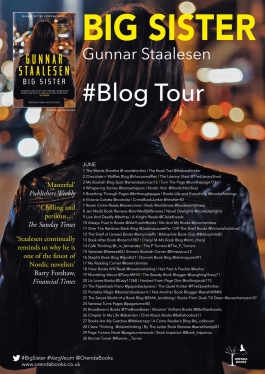