It was with a bit of trepidation that I agreed to be part of the blog tour for the second novel by Johana Gustawsson. I had read Block 46 and it was one of my stand out novels of the year, so there  is always the worry that the second one won’t be quite so good. However I needn’t have been concerned, Keeper is a stunning novel from an author being hailed as the ‘Queen of French Noir’.

In Keeper we again meet Profiler Emily Roy and true crime writer Alexis Castells. An actor has been abducted from her home in a case similar to the Tower Hamlets murders ten years previously. Over in Sweden a body has been found, again identical to those in Tower Hamlets. However the perpetrator of those crimes is in prison. Have they got the wrong man locked up or is there a copycat? Alongside this is the Whitechapel of 1888. Jack the Ripper is at large and women are running scared.

This was another superb read that was absolutely gripping. From the outset you are drawn into a dark and disturbing world both of modern day serial killings and Victorian fear. I have always been fascinated by the Jack the Ripper story, the phantom killer whose crimes were never solved. Therefore I was utterly fascinated by these chapters. The writing is such that the sights and sounds of Victorian England completely engulf you and you feel like you are living through the filth and stench. Yet it seamlessly switches into modern day terror without any interruption to the fast flow of story.

I really like the characters in this novel, and although I still find Alexis a little annoying as a pair they have a great dynamic. One of the things I also think works well within this is the fact that there are lots of peripheral characters including parents, partners, other officers, yet for me they all had a place and were easy to keep track of. I love the fact that despite the majority of the book being very dark and seedy there were moments of humour that really lift the story.

I cannot recommend this novel enough. It is both a fascinating story linking past and present, and a thought provoking read that will stay with you long after you have finished it.

Make sure you visit the other stops on the blog tour, and get your copy here: 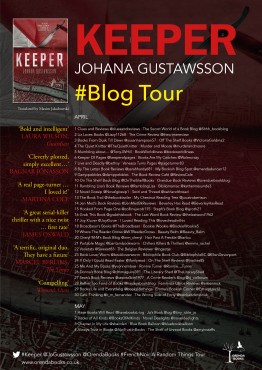 One response to “Keeper by Johana Gustawsson – a review BLOG TOUR”