For my second post of the day, I have been reading Unrest by Jesper Stein. I am a big fan of the Nordic Noir thriller, therefore when I was invited to read Unrest by Jesper Stein I was more than happy to do so. Especially as this novel is set in Copenhagen a place I am visiting with work next month and I always like to read books set in places I visit.
Unrest opens when the city is under siege from a group called Autonomists. They are rioting and the city is literally burning. As the police are trying to regain control they come across a body in a cemetery, a place that was cordoned of with only the police allowed access. Detective Axel Steen is assigned to the case and soon links it to the demolition of the nearby Youth House. The demolition of which was the spark for the riots. However things soon become even more complicated.
Unrest was an interesting novel although I found it quite tricky to keep track of what is going on in parts. The characters are all a bit ‘shady’ for want of a better term including the lead Detective Axel Steen. He lives alone and is still in love with his ex wife who isn’t happy about him seeing his daughter. He tries to manage his loneliness and insomnia with smoking joints and work. I wouldn’t say he was a character I particularly liked, but he was interesting.
This is a tricky novel to review as I did enjoy it, yet it was disturbing in parts. It’s a book that throws everything at it, murder, drugs, riots, corruption, politics and drama. The story was complicated and there were a lot of characters to keep track of. However the novel was well written and is a story that makes you think. I especially enjoyed the setting in Copenhagen and the descriptions of the city itself which was almost another character in the novel.
For those who are fans of gritty, dark and disturbing crime then I’d recommend Unrest by Jesper Stein available on Amazon.

To find out more you can visit the other stops on the blog tour: 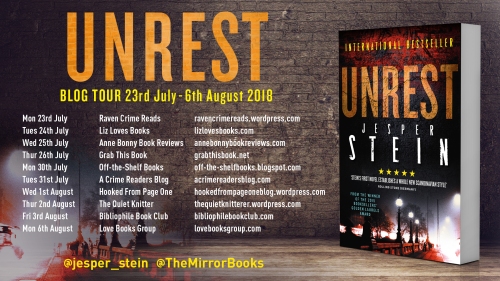