The Last Widow by Karin Slaughter – a review BLOG TOUR 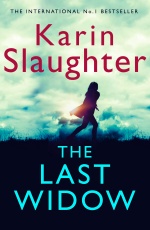 I was very excited to be invited onto the blog tour for the latest novel by Karin Slaughter, The Last Widow. I have been a huge fan of Karin Slaughter since I read her first novel Blindsighted. This introduced us to Sara Linton, paediatrician and medical examiner and I have followed both that series and her later ones featuring Special Agent Will Trent.

In The Last Widow, Mother Michelle Spivey had been snatched from the shopping mall and despite extensive searches it is like she has disappeared into thin air. A month later partners Will and Sara are enjoying a nice afternoon having dinner at her mother’s house. When they hear an explosion, they both run to help. However things soon spiral out of control as Sara is taken and ends up at a remote commune at the mercy of a radical violent group. Will has to go undercover in the hope that he can save the woman he loves.

The Last Widow was a novel that I felt started quite unusually in that we see the same scene played out from different viewpoints. This gave the book an interesting start as the points all diverge into one as the action heats up. This repetition also gave the book what felt to be a slow start which draws you in and is actually needed as once you are in this is a very dark, brutal yet utterly enthralling story.

I find the idea of communes and ‘living off the grid’ fascinating (not that I would ever want to do it, how would I feed my Criminal Minds addiction without a tv) and this novel took that idea to a whole new place. The chapters from Sara’s point of view as she is help captive were really brought to life. There is lots of well researched background to the crime element that taught me more than I really wanted to know about some frankly abhorrent groups of people. All the more scary when you put this into the context of todays climate.

Despite the dark nature of a story that covers paedophilia, rape, murder, terrorist attacks, and germ warfare, this was a story with lighter elements too. One of the things I love about Karin Slaughter’s novels are the characters, and the sarcastic humour of Faith, and her interaction with Will are one of the best parts of the story. Although this is the latest in the series personally I think it can be read as a stand-alone as it is very much a plot driven novel, rather than a character driven one. However as with all series you will get a better understanding of the motives and the family if you have read previous novels.

I really enjoyed The Last Widow and would highly recommend this fascinating story. To find out what others thought of The Last Widow visit the other stops on the tour.

You can purchase The Last Widow here