As many of you will know fellow blogger Noelle Holten is not only a great book blogger, she is also a fabulous author, therefore I was very pleased to be invited onto the blog tour for her latest novel Dead Wrong.

In Dead Wrong notorious serial killer Bill Raven is behind bars. DI Maggie Jamieson put him there and is convinced of his guilt. However when one of the missing women that Bill Raven admitted to killing turns up dead, and it is clear that she was alive until a few days ago, her colleagues start to doubt her. Maggie is then in a race against time to find a second killer and the other missing women who could potentially still be alive.

This was a fantastic second novel that kept me gripped from the beginning and just like her debut it didn’t let up. Unlike the first in the series, the main character in this novel was actually Maggie rather than Lucy (although she was still there of course) I actually liked Maggie more this time, she seemed a bit less annoying than in the previous novel, the fact that she may have been wrong about the conviction of Raven has dented her confidence slightly, despite her belief that she convicted the right person.

I enjoyed the interaction between Maggie and Bill Raven, he is clearly enjoying playing games and the scenes between them were practically crackled with tension. The writing in this book is crisp and punchy, the twists are ones you don’t see coming and it is a very enjoyable read. My only criticism about this is the short chapters, the fact they are short means that the temptation to keep reading just one more chapter meant it kept me up late into the night!

This can be read as a stand-alone but I wouldn’t recommend that, purely because the first novel is so good you should definitely read that too. For my review of Dead Inside click here.

To find out what others thought of Dead Wrong you can visit the other stops on the tour. 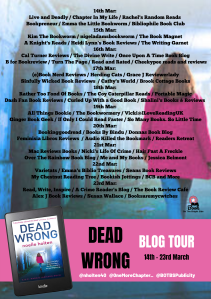