The Silent House by Nell Pattison – a review BLOG TOUR

When I was invited to join the blog tour for debut novel The Silent House by Nell Pattison, the premise sounded very interesting and I was not wrong.

Paige is a hearing person in a non-hearing world. She makes her living as an BSL interpreter and usually her work involves helping people understand doctors or going to fill in bank forms. Therefore when she is called on by the local police to help with a case, she isn’t ready for what she finds. A young girl has been murdered in her bed, a girl that Paige knew. She also knows the family, all of whom have become suspects. As Paige become more entwined with the case she begins to realise that her and her family could be in danger and that the killer could be closer than she thought.

The Silent House was a great read. I was fascinated by both the storyline and the setting. The deaf community portrayed in the book is a close knit group. Yet as with any group of people there are tensions and issues which all come to the fore as Paige finds out more about the crime and people’s involvement. I enjoyed finding out about a world that I didn’t know much about and how things we take for granted as hearing people such as someone ringing the doorbell can be difficult for a deaf person. (there is a flashing light used in case you are interested)

I thought the writing was very accomplished, it flitted easily between signing and non-signing conversations and it was clear at all times who was talking which for someone easily confused like me was great. I liked the character of Paige and her sister Anna, and I enjoyed the interaction between them. I did find Paige a bit emotional at times, however to be fair she isn’t someone who would be used to dealing with murder or dead bodies so it’s understandable that she might be a bit out of her depth.

This is obviously the start of a new series and I would definitely want to read the next instalment and find out more about what happens to Paige.

Don’t forget to visit the other stops on the tour to see what they thought of The Silent House: 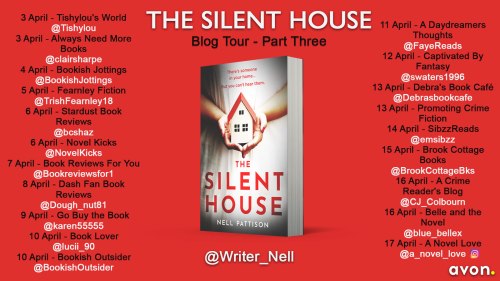 Get your copy here The Silent House