Truth or Die by Katerina Diamond – a review BLOG TOUR 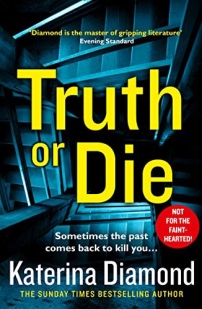 I have read a couple of previous Katerina Diamond’s books and so was pleased to be invited to join the blog tour for her latest novel Truth or Die.

Truth Or Die starts with the death of a teenager after falling from a building. This is followed quickly by the body of a professor being found in his private office having been brutally murdered. DS Imogen Grey and DS Adrian Miles are sent to Exeter University to investigate as this body is only the first of many. Someone is playing a deadly game and Miles gets caught up in it in a very personal way. As the body count rises the past comes back to haunt the detectives.

I have to say that it wasn’t until I started reading this that I realised I had obviously read the novels out of order. This was actually the 5th in the series, yet it did work as a standalone. As with most series I think you get the most out of them if you read them in order but then this is definitely a series that you should want to read from the start.

The dynamic between Grey and Miles is interesting and this slow burn of a relationship is at the centre of the narrative. They are both characters who have had issues in the past and struggle to trust other people which is part of what draws them together. I enjoyed the interaction with the characters and felt that this was a couple I want to see work out.

The actual mystery part of the story was also good, and the reasons behind the murders was quite disturbing. However I did feel that it lacked a bit of motive at the end and seemed a bit of a rushed ending to what was a good story. I enjoy a bit of grisly murder and this didn’t disappoint with the crimes and descriptions. We also see the return of a previous character and for me that really ramped up the tension as they are one of those characters whose calm menace really jumps off the page.  This is definitely as it says on the cover ‘not for the faint hearted’ and I think it shows the quality of the writing that you flit between reading about gruesome murder and caring about characters without blinking.

I would recommend Katerina Diamond’s novels if you like a good crime thriller with a twist, but I would suggest starting at the beginning of the series in order to enjoy them at their best.

Truth or Die is out now, get your copy here. To find out what others thought of Truth or Die don’t forget to visit the other stops on the tour. 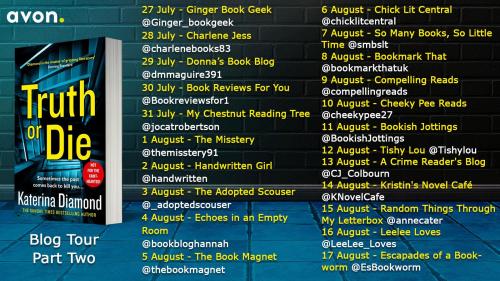